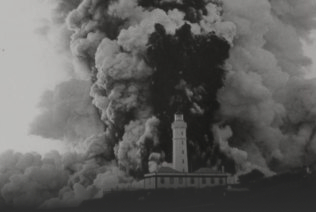 In the early hours of September 27, 1957, as the earth started “swinging” incessantly, the watchmen at Costa do da Nau, just a few meters above Capelinhos lighthouse, noticed that the sea was rough half a mile off the coast, to the west. Frightened, they left the lighthouse and warned the lighthouse keepers and the whalers who were already at the port. This time it wasn’t a whale – the ocean was boiling and there was a foul smell. This is how Vítor Hugo Forjaz, Azorean volcanologist, described the beginning of the Capelinhos eruption.

From the human point of view, this amazing natural phenomenon completely changed people’s lives. Earthquakes rocked the island for over a year while the volcano expelled ash that buried farmed fields and destroyed homes under its weight. Families lost their possessions and their livelihoods. Thousands emigrated to the U.S. after then Senator John F. Kennedy authored legislation to welcome these environmental refugees.