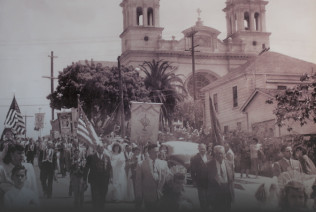 The Holy Ghost Festa or “Festa do Divino Espírito Santo” has its roots in medieval Aragon, where Queen St. Isabel of Portugal was born. The queen honored the poor in celebration. The idea was to make the poor royalty for a day where they could eat and dance, an escape from their lives of drudgery. In the Azores, as in the United States, a crown is placed on a queen, or on an emperor or empress in some communities, and he or she is escorted through the streets in a procession to the local church where Mass is celebrated. The entourage then processes to the fellowship hall where there is a feast and a dance. Anyone is invited to eat, as it is free, following the tradition of feeding the poor as in Queen St. Isabel's time. The meal is "sopas", bread and meat in a beef broth. On the crown is the symbol of a dove representing the Holy Spirit.

There are many versions of the story of Queen St. Isabel's miracle of turning bread into roses, but they are all fundamentally the same. She is said to have been forbidden by her unfaithful husband to give to the poor. Having hidden bread to give away in her apron, she encountered King Diniz, who asked her what she was carrying. Not wanting to let on that the contents of her apron were meant for the poor, she responded that they were roses. The bread was transformed into roses, and King Diniz, who could not understand how she could have fresh roses in January, did not punish his wife.