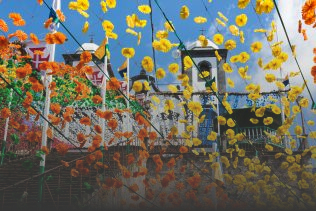 The year is 1418, the year of the discovery of Porto Santo Island, an event that occurred after a storm on the high seas that diverted from its intended route a vessel that was following the African coast. The navigator Gonçalves Zarco and his crew were saved by this small piece of land that they named Porto Santo (Holy Harbor). A year later, in 1419, another piece of land was spotted in the distance, which they named Madeira (wood), due to its forested slopes. Six-hundred years later, Madeira has a storied history and heritage.

Rising steeply from the Atlantic Ocean off the coasts of Europe and Africa, Madeira boasts a mild year-round climate and a 1,350-mile network of "levadas" – man-made channels dating back to the 16th century constructed to carry water for irrigation. Volcanic in origin, Madeira’s rugged interior rises abruptly to over 6,000 feet (1,800 metres), with forests of pine and laurel flanking its jagged peaks.

Settlers came from continental Portugal. Economic activity started with cereals and crops until the late mid-15th century. Then came the era of sugar cane that made Madeira an international trading port in the 16th century. Finally, wine production replaced sugar cane. Madeira became known for its wine in the 17th and 18th centuries. In the 19th century, wine production suffered tremendously, but has rebounded to new heights, complemented by a robust tourist trade.