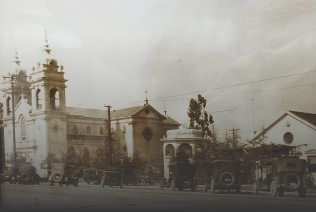 “When the bells rang, people cried with happiness,” Monsignor Henrique Augusto Ribeiro wrote of the most important day in the history of the Portuguese community in San José. The date was December 30, 1918. Five Wounds Portuguese National Church, a project started by Monsignor Ribeiro in 1913, was almost complete.

Five Wounds Portuguese National Parish flourished into the early twenty-first century in the care of pastors who hailed from Portugal. Finishing touches like stained glass windows were installed where opaque glass once was. A used organ was purchased from a Protestant church to regale parishioners with music. A new rectory was constructed to house pastors and vicars, including a hall for meetings and small gatherings. An elementary school was built along with a convent for the immigrant sisters who would teach the children of Portuguese immigrants. And a soup kitchen was established to feed the hungry, living what Queen St. Isabel of Portugal lived centuries ago.

Since the dawn of the century, Five Wounds Portuguese National Parish has experienced years of turmoil, as demographics and church politics have challenged the community. A quick and somewhat tumultuous succession of non-Portuguese pastors and administrators created a veil of uncertainty. One result was the closing of the elementary school at the end of the 2008–2009 school year -- after forty-nine years of operation.

As the parish transitions from an almost exclusively Portuguese congregation to one including other ethnic groups, especially Filipino and Vietnamese parishioners, it is undergoing a crisis of identity. The older Portuguese are trying to understand what “preserving” the church’s history and identity means. As time passes, it is becoming increasingly clear that the preservation of its identity will have little to do with maintaining a Portuguese majority in the church and more with preserving the history and legacy of the work ethic, the faith community, and the traditions maintained over the decades.

As it passes the century mark, Five Wounds Portuguese National Parish is faced with a challenge much greater than those it faced “when the bells rang [and] people cried with happiness" in 1918.

The Portuguese Museum thanks Miguel Valle Avila for sharing his wonderful book "A Vestibule to Heaven" with us. This well-researched book was the basis for our exhibit. Along with the many original documents Miguel used to compile the story of Five Wounds Church, he included in his edition numerous stunning photos that he has taken over the years. This book is a valuable contribution to telling the Portuguese immigrant story in Santa Clara County and is available from Portuguese Heritage Publications and Five Wounds Church Rectory.