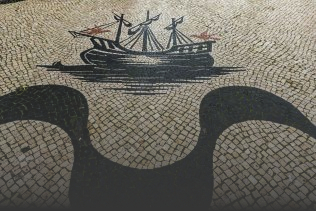 Cobbled sidewalks appeared in Portugal around 1500, but the Portuguese cobbled sidewalks known as "calçada à portuguesa" began to appear in the mid-19th century. The sidewalks of that era in white and black limestone were characterized by the irregular shape of their stones. Since the mid-20th century, Portuguese sidewalks have been called "calçada portuguesa" and are created using stone cubes arranged diagonally.