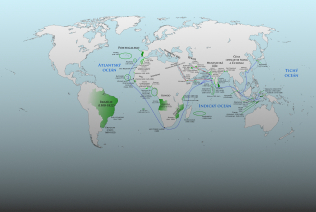 The Portuguese-speaking world is wide indeed –- European, African, Asian, and American. It all started in the 1400s with the ambitions of a very small nation, Portugal, to find a new trade route to bring to Europe the much-desired spices from Asia. At that time, the trade route went through the Middle East and into the eastern end of the Mediterranean Sea. In search of a better route, Portuguese explorers decided to go south around Africa, then east to Asia. Almost accidentally, they went westward to the Americas too. They established colonies where Portuguese became the native language.

While several small places were taken over by other countries, most of the colonies remained Portuguese possessions. Brazil, however, was granted independence in 1822.

In the mid-1900s, the African colonies were restive, wanting freedom from their European owners (England, France, Belgium, etc.). The Portuguese colonies were no exception and were particularly unhappy under a right-wing Portuguese government.

The dictatorship of Francisco Salazar (1932-1968) and then Marcelo Caetano (1968-1974) ended with the “Carnation Revolution” in 1974. The Portuguese political order was radically changed, and there was little desire to maintain the colonies which no longer brought wealth to the mother country. And so, in 1975, independence was granted to the African colonies (Angola, Mozambique, Cabo Verde, Guinea-Bissau, and São Tomé and Príncipe) and to East Timor in Asia. All were under-developed and under-educated and not prepared for nationhood and self-governance.

Macau, much more developed than the other colonies, was Portugal’s last possession; it was returned to China in 1999.

While the Atlantic islands of Madeira and the Azores might have been included in the category of colonies, they were much more closely connected to continental Portugal. They remain part of Portugal as autonomous regions -- as are all provinces or “states” of Portugal.