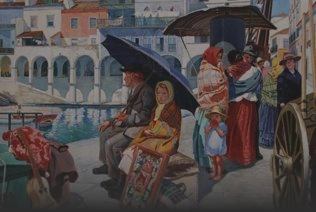 Portugal has long been a nation whose people emigrated. Socially significant emigration first occurred in the 15th and 16th centuries during the great explorations. Although the Portuguese established trading posts at many places in Africa and Asia, Brazil was the main colony of settlement. Later, numbers of Portuguese settled in the African colonies of Angola and Mozambique.

Emigration on a massive scale began in the second half of the 19th century and continued into the 1980s. Between 1886 and 1966, Portugal lost an estimated 2.6 million people to emigration, more than any Western European country except Ireland. The main reason for emigration, at least in modern times, was economic. Portugal was long among the poorest countries in Europe. With the countryside able to support only a portion of farmers' offspring and few opportunities in the manufacturing sector, many Portuguese had to go abroad to find work.