Birth of the Ukulele

Madeiran immigrants created the ukulele from the "braguinha"

The Hawaiian "sound" was introduced in 1879

Who would have thought that Portuguese immigrants who migrated under contract to work on Hawaiian sugar plantations in the late 19th Century would create a musical instrument that would be adopted by Hawaiian royalty and would change Hawaiian music?  The instrument now known as the "ukulele" is popular throughout the western world and Japan.

It all started in 1879 when a group of immigrants arrived in Hawaii from Madeira.  Stories have it that either Augusto Dias or João Fernandes or both upon disembarking began playing musical instruments as their way of thanking God for their safe passage.  The music apparently delighted a group of Hawaiians.

The local Hawaiian Gazette reported that the “Madeira islanders who recently arrived here have been delighting people with nightly street concerts.”  This “very sweet music is played on a strange instrument which is a cross between guitar and a banjo.”  The music was both "fado" and folk music and the instrument was called a "braguinha", which originated in Braga, Portugal, in 1719.

Since these musicians were skilled craftsmen who could not find work in the plantations using their skills, they worked in the fields until they could save enough to repay the cost of their transportation.  Upon completing their obligation, they went to work in their craft.  Manuel Nunes is given credit for the redesign of the braguinha that created what we now know as the ukulele.  The redesign included changing the tuning and size which allowed for easier musical chord formation.

These two musicians, along with Manuel Nunes and José Espírito Santo, were cabinet and musical instrument makers who would later develop a musical instrument industry.  Nunes was the first to open a shop with the assistance of Dias and Espírito Santo for the manufacture and sale of the braguinha (later to be called ukulele).  In a few years, all three had started their own separate businesses making and repairing a wide range of stringed instruments.

There is some disagreement as to the translation of the Hawaiian word "ukulele".  It is most commonly thought to mean “jumping flea” to describe what the fingers look like as they maneuver the fret board of the instrument.  Hawaiian Queen Lili’uokalani preferred a poetic translation of "uku" as “the gift” and "lele" as “to come” describing the cherished instrument as a gift from Portugal to Hawaii. 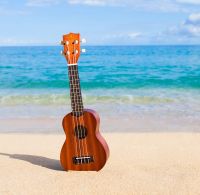