One of the Christmas traditions in Madeira is the setting up of the nativity scene known as "lapinha" in honor of Baby Jesus that takes place only a few days before Christmas Day.

According to tradition, there are two types of lapinhas, (which represents "lapa", "gruta" or grotto): “a escadinha” and “a rochinha”. "A lapinha escadinha", the oldest version, is thought to have been brought by the colonists who first settled in Algarve and then in the islands. Constructed as a staircase of 3 small steps, these are painted or covered with bright paper and placed on a table/dresser over a white linen cloth. Baby Jesus is then placed on the top step crowned by an arch of red and white paper/silk flowers on the top of the altar. For decorative and around the stairs, small figurines of clay and handmade houses of cardboard are placed in the middle of the "searinhas" which are young sprouted plants of wheat, corn, lentils, and rye; there are also fruits of the season, endemic plants such as “alegra campos” and "cabrinhas," all popular in the madeiran design to obtain the blessings of the Child Jesus for good harvest in the cultivation of gardens. This curious nativity scene is often illuminated with the traditional oil lamp that is never allowed to go out from Christmas Eve until the Epiphany, January 6.

Later, the second type of lapinha emerged and perhaps “a mais madeirense”,  the "rochinha", influenced by the Franciscan evangelization around the 1600s. Set usually in the corner of a room on a platform, and with use of paper, wash-painted of "viochenio," together with the support of "socas", this construction comes alive mimicking the rugged terrain of the island. “O Menino Jesus” is placed on the highest peak; the image is dressed in white satin with some embroidery and an arch of white and red flowers is placed around him. Along the side is placed a painted clay rooster. Scattered across the hills and valleys are shepherds with offerings of fruits, gourds and animals. All sorts of regionally-dressed folk

figures are included such as a folk dance group, a band, a parade of school children, a religious procession and even a scene of the traditional killing of the pig ("matança"). Handmade cardboard houses and churches are included apart from other characters relating to the Madeiran way of life. At the base and center of the mountain is the grotto or "gruta" where Baby Jesus is placed on a bed of straw, surrounded by Mary, Joseph, a cow and a donkey. On the ground and around the rocks, sand or sawdust is spread creating roads and trails leading to the center. Larger figurines, animals and other embellishments are found. Close to the entrance, the Three Kings are placed as if they were still traveling. At the edge of the structure, "searinhas", ferns, "cabrinhas," along with the polished fruits of apples and oranges completes the scene and all illuminated by the traditional oil lamp, the "lamparina".

It is common during the "festa" to invite others -- “Venham ver a minha lapinha!”.  Groups of family and friends would stop by and sing traditional songs and are given a drink of homemade orange liqueur and the famous “bolo de mel” or honey cake. The Christmas traditions and the New Year season in Madeira are deeply ingrained in the way of life of the Madeiran people. 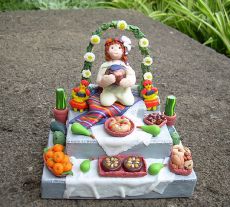 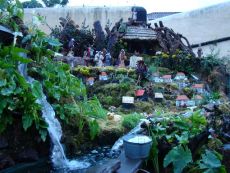 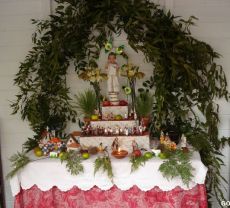