Ceramics work in the Azores dates back to the late 15th century.

In the village of Lagoa on São Miguel Island in the Azores, the making of the small figurines for "presépios", or nativity scenes, was a way for ceramic factory workers to use their spare time to earn extra income for their families.

Ceramics work in the Azores dates back to the late 15th century, not long after discovery of these Atlantic islands. The best clay  was from the islands of Santa Maria and São Miguel.  In 1862, Bernadino da Silva came from the Portuguese mainland to establish a ceramic factory at Lagoa, where the port could receive shipments of clay from continental Portugal as well as from Santa Maria.  The continental clay was mixed with the Azorean clay to make a far superior product.  This first ceramic factory, established to make dishes, tiles, jugs and basins, survives today as Cerâmica Vieira, headed by the fifth generation of the founder’s family.

The Portuguese figurines are called "bonecos" and their makers are "bonequeiros".  A “pioneer” bonequeiro was Luis Gouveia, an employee at the ceramics factory.  He taught António Branquinho (who died in 1998), who in turn taught his son-in-law Carlos Pacheco.  Gouveia also taught Arsénio Moniz and João Raposa Paiva.  Before his death, Paiva taught his wife, Fatima Varão.  Messrs. Moniz and Pacheco, and Mrs. Varão, are still active today, along with António Morais and António Amaral.

All work is done in essentially the same way.  First, a mold is filled with clay and the two sides of the mold tightly pressed together.  The clay is then allowed to harden before it is removed from the mold.  The figurines are then trimmed or “cleaned up” with a small knife before they are painted.  All of the men working today use the help of their wives in the painting.  The paint is water-based; it dries more quickly than does oil-based paint.  Mr. Moniz remembers when he could not afford paint brushes and used a chicken feather or horse hair instead.  After the figurines have been painted they are fired in a kiln at 1,475°F.

Arsénio Moniz is the only one of the group who uses a potter’s wheel.  This is how he forms the round dome roofs of the Holy Land buildings.  The bonecos may be purchased in several shops in Ponta Delgada or in Lagoa.  Each of the bonequeiros will also take special orders to sell directly to the customer.

This exhibit was brought to San José by Roberto Medeiros, former vice-mayor of Lagoa and director of the association for the promotion and sharing of nativity scenes. 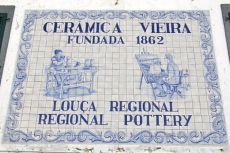 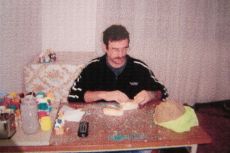 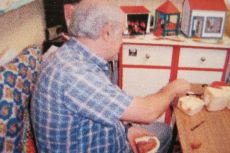 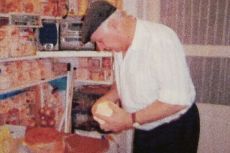 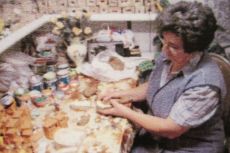 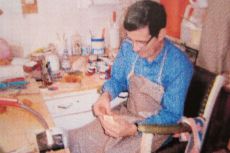 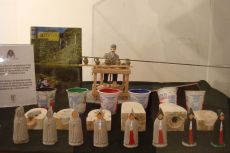