The Portuguese Historical Museum has continued to add many cultural artifacts, displays and interactive experiences to help communicate the rich history of the Portuguese and their amazing contributions to world history.

Dedication Ceremony
On Saturday, June 7, 1997 as part of that year’s Dia de Portugal festivities, a celebration and dedication ceremony opened the museum to the public. Civic and community leaders participated in the ribbon cutting ceremony. Initially, the exhibits were limited to the upper level since the lower level was not completed and the elevator was yet to be installed.

1998-2000
These years saw the museum continuing to expand as well as update its exhibits. Some of the original exhibits were redesigned and updated. The lower level was completed and the elevator installed. A kiosk with a touch screen video was installed on the outside of a bandstand. Plaza benches and the replica of the Rosa dos Ventos (Compass Rose) centerpiece were installed in the plaza. Special exhibits were designed and presented at the museum.

2001 - Portuguese Fraternal Societies
The Fraternal Societies exhibit traced the development of the six major Portuguese fraternal societies from their beginnings through 2001. The exhibit brought to light the tremendous influence that the fraternal societies had on the fledgling Portuguese immigrant community. The societies acted as the Internet of the times, disseminating information and news throughout the community and keeping immigrant communities connected to one another.

2002 - Holy Ghost Festas
The Holy Ghost festas are the most well known aspect of the Portuguese community in California. At one time existing in 141 communities in the state, they still to this day are active in 92 locations. These festivals throughout the summer in California reenact a ritual going back many centuries and re-dedicate the spirit of the local brotherhood. The many Holy Ghost halls throughout California are important historical buildings still used by both the Portuguese and the community-at-large. 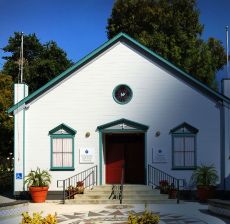