The Portuguese Historical Museum Committee became part of the Portuguese Chamber of Commerce in 1992. It then applied for and received initial funding from the Santa Clara County Heritage Commission to construct the museum.

The project later transferred to the Portuguese Heritage Society of California (PHSC) which was incorporated in 1993 to fund, build and direct all aspects of the museum.

On June 11, 1993, the project formally kicked off with a site dedication ceremony at History San José in Kelley Park.  Julio Rose, architect and son of Joe and Mary Rose, developed the initial architectural design and drawings for the museum. Lester Rose, lifelong resident of San José and longtime general contractor, agreed to oversee the construction. Despite donations from individuals and community and civic organizations in California and in Portugal, securing funds before starting construction proved to be a formidable task. The PHSC, with the agreement from the City of San José, decided on a “pay as you go” strategy, completing each building phase as funds were available while relying on donated labor and materials from the community to complete the work.

The groundbreaking was held on September 17, 1995, more than two years after the site dedication. Fundraising events had been taking place during the two-year period.

Constructing the museum was a marvelous example of cooperative community effort. In addition to paid contract work, many local community businesses and individuals donated time and materials to build the museum. Furthermore, board members spent countless hours working at the construction site. Two museum exhibits, the Donor Wall and the Panel of Contributors recognize those who made the project reality. In addition, the Wall of Honor lists those who contributed financially to the construction of the magnificent plaza. 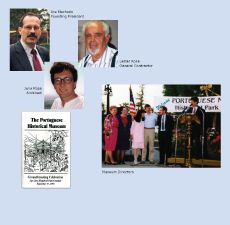