Wine on the Iberian Peninsula Dates Back to Ancient Civilizations

Portugal is deservedly famous for its wines. It ranks fifth in the world for wine exports, behind Italy, France, Spain, and Australia, and ahead of the U.S..

Portuguese wine is the result of traditions introduced to the region by ancient civilizations, such as the Phoenicians, Carthaginians, Greeks -- but mostly the Romans. Portugal started to export its wines to Rome during the time of the Roman Empire. In modern times, Portugal began exporting wine to England after the Methuen Treaty in 1703. From this commerce, a wide variety of wines began to be grown in Portugal.

In 1758, one of the first wine-producing regions of the world, the "Região Demarcada do Dourowas" was created by the Marquis of Pombal in the Douro Valley. Portugal has two wine-producing regions protected by UNESCO as World Heritage -- the Douro Valley Wine Region (Douro Vinhateiro) and Pico Island Wine Region (Ilha do Pico Vinhateira) in the Azores. Portugal has a big variety of local kinds, producing a very wide variety of different wines with distinctive personality. A wide range of native grape varietals as well as soil and climate differences contribute to abundant types of Portuguese wines.

One of Portugal’s most famous wines is Port, which is exported from the city of Porto from which the wine gets its name. Port can be red, the most common, or white, ruby, or tawny. The grapes are grown in the beautiful Douro River Valley where the finest "vinho verde", or “green wine,” is also produced. The wine is not green, though! It's made with grapes that are slightly less ripe (hence green). Vinho verde is a Portuguese specialty; it is a light and refreshing wine, served chilled.

The island of Pico in the Azores produces red and white table wines, aperitifs, "angelicas", and brandies. Wine names include "vinho de cheiro" and "verdelho".

Wine from the island of Madeira is called, logically -- Madeira. It is a fortified wine, meaning that alcohol (brandy) is added and the wine is kept warm for three to six months, then gradually cooled and aged for four years or more. It ranges from the light dry Sercial to the sweet Malmsey. In between are semi-dry Verdelho and fruity full-bodied Bual. In early America when no wine was produced here, Madeira was easily available. Madeira was used to toast the Declaration of Independence in 1776. George Washington drank a pint of Madeira every day with dinner. 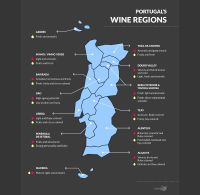