A new church serving the Portuguese of Jingletown

In the early 1900s, the Kennedy Tract, located along the estuary in what became East Oakland, was an area populated by many Portuguese who had emigrated from Madeira and from São Miguel in the Azores to the Hawaiian Islands. Once they had completed their contractual obligations working on Hawaiian sugar cane plantations, many immigrated to California, attracted to the area by the large number of canneries and small factories and the California Cotton Mill, which employed thousands of people. In general, the immigrants were poor and under-educated and did not speak English fluently.

In 1914, Father José F. da Silva, a Portuguese priest, came to Oakland. He did not have a permanent assignment and began to serve the Portuguese immigrants in the area. A request was presented to the archbishop to establish a church to meet the needs of this community. The archbishop sought the advice of Father Joseph Galli, pastor of St. Joseph's Portuguese National Church in West Oakland, to determine whether the Salesians should establish a mission church to minister to this community. After consulting with his superiors, Father Galli agreed to the archbishop's request.

The work had humble beginnings. Father Galli assigned Father Cândido Ribeiro, a young priest originally from Portugal, who had become an assistant pastor at St. Joseph’s in 1911, to the new mission. Father Ribeiro immediately rented a simple garage located in front of the Fruitvale train station. Later Father Galli purchased a lot at the corner of 23rd Avenue and East 9th Street for $6,000 with funds borrowed from the archbishop's office. The church was named Mary Help of Christians.

Father Cândido was the life and soul of the project. The parishioners, though poor, donated both materials and money. The construction cost for the church was $9,000. On December 15, 1915, the archbishop dedicated the new church. Simple in appearance, the church was a solid wood structure with seating for more than 300 people and ample orchestra space for the choir. Father Cândido continued to reside across town at St. Joseph's Church. He came to the parish to teach catechism to the children, helped by the Sisters of the Holy Family. Two Masses were celebrated on Sundays, with homilies in both English and Portuguese. That same year, many parish organizations were founded, such as the Holy Rosary, with 200 members, the Sacred Heart Society, and Mary Help of Christians, patroness of the church.

In 1922 while at St. Joseph’s Church, Father Cândido had established the “Orchestra Portuguesa de São José”. In addition to serving the two churches, the band performed many recitals at other venues, including the Oakland Auditorium. From 1915 until his death in 1918, Father Cândido lived only for his parishioners of Mary Help of Christians. His illness and death were due to his assistance to those who fell ill in the flu epidemic during World War I.

After Father Cândido's death, Father Henrique José Ferreira, assistant at St. Joseph's Church, took over the direction of Mary Help of Christians. Like his predecessor, he continued to reside at St. Joseph's Church and to rely on the help of the Holy Family Sisters. He promoted the existing parish organizations and gave life and major support to the parish, despite being faced with unnecessary competition between the two major parish Holy Spirit societies.

When Father Ferreira went to Italy temporarily in May 1923, Father Galli put Father Anthony Ragogna, his assistant, in charge of Mary Help of Christians. Although the church became a separate parish, the priests continued to live at the St. Joseph’s rectory, and “[w]aking up early every morning, getting a piece of bread and putting some coffee in a bottle [Father Ragogna] took a trolley to get to his church. He did this every day, for over four years.” Beginning in 1924, two more Sunday Masses were added. The people responded very well, and there was a noticeable reawakening in their frequenting of the sacraments at all church services.

With their special interest in educating and serving young people, the Salesian Fathers looked at options to provide a place for young people to meet and be educated. The decision was made to move the church from its original location to a nearby lot and to raise it so that a parish hall could be constructed as the ground floor of the building. The first contract to move the church and construct a hall was for $10,000. This project took all of 1924 and part of 1925. During this time, there were church bazaars, a variety of raffles, and dramatic plays in the City of Oakland Auditorium. Many parishioners, although poor but with much goodwill, assisted in this work effort.

During the rebuilding of the church into a two-story structure, everything was done to boost the parishioners’ morale. Missions were held, which in those days were separate for men and women because there was insufficient room in the church to seat everyone. Feast days were celebrated with great solemnity. A musical group, the Salesian Band, was formed and played for all the services and events. The two warring Holy Spirit societies were reorganized into one and named the Society of the Holy Spirit of the Church of Mary Help of Christians. It was incorporated with the State of California and remained under the jurisdiction of the pastor. In addition, the Holy Name Society was established, with members chosen from among the leading parishioners.

Later a decision was made to purchase the land across the street from the church. The purposes of this purchase were to avoid poorly constructed buildings across from the church and to provide a playground for the youngsters. A triumphal arch was placed at the playground's entrance, dedicated to the apostle of youth, St. John Bosco. A statue of the saint was also placed on a beautiful stand at the end of the playground.

The community around Mary Help of Christians saw its neighborhood split in the late 1940s by the building of the Nimitz Freeway (US 880), which passes within a few blocks of the back of the church. Father Anthony Ragogna continued to serve as pastor until 1950, when Father Edgar Rocha succeeded him. In 1991, the Salesians transferred the pastoral responsibility of the church to the Oakland Diocese, and the church became a mission church of an adjacent parish. Today it is a separate parish serving a primarily Mexican-American community. 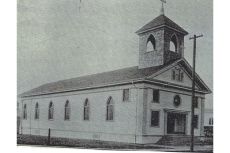 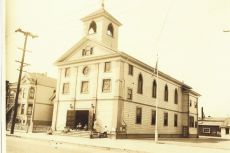 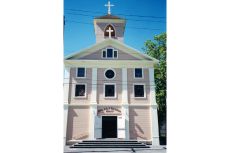 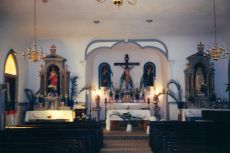 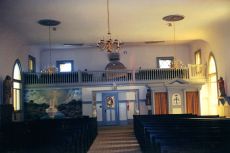 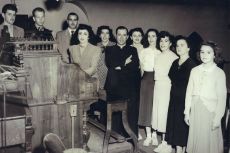 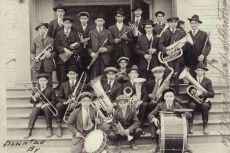